I drink alcohol in a social way rather than a problematic way. But, like many people, I probably drink more than I should from time to time. We all know the advice about how much is acceptable to drink, about units and guidelines. We all know we ignore this now and then. This is not advice that specifically applies to those with diabetes, and nor should be the ability to fail to follow it.

For this post, I decided to do some field-work, and so I met up with @clarentina, we put a few away and talked about our experiences of boozing with the ‘betes.

For this, we thought we needed to cover as much of the spectrum of available drinks as we could – and give you some views on what works and what doesn’t.

Rule #1: Eating is NOT Cheating

The first rule of diabetes drinking club is: HAVE DINNER. It is also rules #2-5. We’ve all had the advice that alcohol can push down blood sugar, but it’s also really good at getting you completely battered. If you have something to eat you might avoid going too hard too early and having to go home. Beyond this: THERE ARE NO RULES. There are, however, some non-mandatory guidelines and recommendations. Although this is basically, Diet Mixers, Diet Mixers, Diet Mixers.

To see the effect of our evening, we thought we should test before we started so we can compare with what we have at the end of the night. In line with the above rule, we also ate (Clare, something from a salad buffet with loads of mayonnaise, and Kris, a sausage roll. Strong dietary choices here.). Tests are pre and post-dinner

As we’re in That London, and there’s a tube strike on, we decided we needed to get closer to home before we really let rip, and so to ease ourselves in we had a couple of cans of gin & slimline tonic each on the THAMESLINK. These are great, they’re portable and contain ZERO carbs. Diet mixers are gonna be a recurring theme of the night, I think.

We were planning to go to Wetherspoon’s so as to have a wide wide range of drinks to choose from but due to Wimbledon Tennis, it was too busy so we hot-footed it to an empty looking O’Neill’s (ambiance, 4/10, would not). Clare was feeling a bit on the hypo side after carb calculation fail – and I had gone for a pee – and so a nice sweet rose was selected. Verdict on this one, extremely quaffable, but very sweet. Easy to get carried away with this, and it also left a furry film on the back of my teeth.

Round 3: Sailor Jerry and Diet Coke

On a roll now, we moved on to the diabetic dream that is ANY SPIRIT + Diet Coke. The double win from this blend is that the caffeine from Diet Coke gives you a boost. This is a nice drink, if a little sweet also (but only in taste, this is zero carb).

This seemed as good a time as any to have a test break, so:

O’Neill’s seem to have these special Jager Bomb glasses. They’re super odd and mean you get a big mouthful of Jager.

Basicially though, even though these go against THE RULES by having a sugary mixer – the odd Jager Bomb is fine. Well, not fine, but acceptable.

Round 5: Malibu and Diet Coke

Trying out a few different spirit/mixer combos, this was a deviation from the @clarentina house rule of ‘never drink rum’ but since the rule was already broken on a technicality in Round 3 (is Spiced Rum still Rum?) we decided to go for it. It’s a decent drink, if you don’t mind being overwhelmed by coconut aroma. We were down with this. We thought this might be good for the younger crowd who are yet to develop a taste for booze – and definitely is a good alternative to other, more sugary, sweet options. 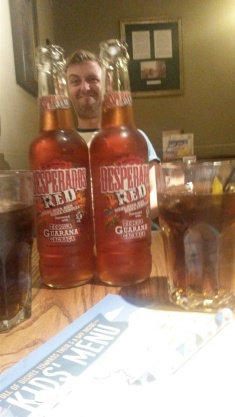 We decided to mix it up a bit and try something a little different. We will not be making this mistake again. Desperado’s Red, for this uninitiated (and the lucky) is marketed as ‘a distinctive combination of full bodied lager with a kick of Tequila and Guarana flavour’. We had a little chat about how Guarana isn’t Guano, but in reality this didn’t help matters. This is a horrible, horrible drink, and a carby one too. This is NOT the drink for Our People. In fact, we didn’t think this was the drink for any people.

Last orders swung round so we decided to be ‘those knobs’ and order a couple more each. Now, onto the gold standard of diabetic drinking, the most efficient way to booze. This apparently tastes ‘like chemicals’ but Kris was not complaining. Quick pointer here whilst we were compos mentis, double check with the barkeep that he has definitely given you diet mixer otherwise your plans will derail faster than they would have anyway. It seems the norm is to ask for diet, then re-ask as they give it to you. Oh, Norm. 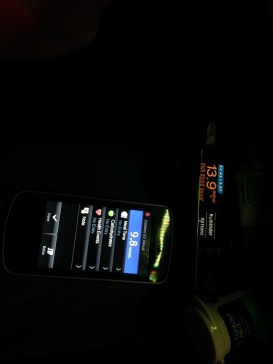 Pleased with our progress in O’Neill’s, we deemed the night was (like us) still young so went on to find somewhere still open. And so it was that we ended up in a club on a Thursday night with a load of teenagers. It was super busy but somehow we managed to get a seat. Maybe they knew. Keeping things simple, we stuck with the Vodka Diet Coke. Somehow these were dispatched pretty quickly, yet they didn’t fix the fact that we hadn’t been pre-warned about the Hawaiian theme disco night and we are both approaching 30, had come straight from work, both with rucksacks, and Clare woke up this morning at 5.45am to try and get to work during a tube strike. But yet we were still there at kicking out time, and walked home in the morning light.

The notes we have say ‘Walk – POLICE’ but on reflection I don’t believe the police were involved.

We both woke up with hypos (Clare 3.3 and Kris 3.8), and attribute that to not having anything to eat at the end of the night. Do this, folks, and bolus gently for it! Alcohol hypos are super dangerous and your awareness may be impaired!

Thirsty Thursday is a dangerous thing. Deviation from standard options is ok, but some experiments don’t pan out (looking at you Desperados Red). Diet Mixers are brilliant for facilitating oblivion without wrecking your sugar. You can have the odd shot, and it won’t ruin you. You don’t have to be the person who has to decline the Jager Bombs cos you’ve got a wonky pancreas. If you’re gonna do that, do it because they’re horrible, awful crimes against humanity.

Drinks of the Night

These are all variations on the spirit and diet mixer theme. They’re solid options you can get almost anywhere.

House Parties will have to wait for another post, as we can get into some more exotic diet mixer options that aren’t available in pubs.