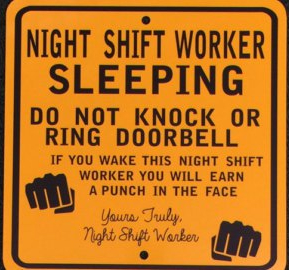 Working with diabetes can be a challenge at times, trying to smooth out hypos and hypers during the working day, but all of this difficulty ramps up a level at night where there are usually fewer colleagues around, your body is struggling to work out why you’re doing stuff at 3am and you’re eating at all the wrong times.

Luckily, Beth, a doctor, and Tom, a nurse,  have put together some tips from their experiences of working busy nightshifts in hospitals. As always, what works for some might not work for you – but we can all be found on Twitter if you want to talk more about any of these issues.

I’m a doctor. Lots of this is going to be about doing medical night shifts – but lots will also be applicable to other nightshift workers.

I worked night shifts for 6 years. I learnt a lot over that time about managing my diabetes on nightshift; but this post comes with a warning: YDMV, but also YSMV!

For those to whom the first doesn’t make sense, it stands for “your diabetes may vary”. We know that what sets things well for one PWD is sometimes not good at all for another. I’m a doctor, but this post is not medical advice: we are all different. So, on to the second acronym: YMSV – your shifts may vary. As in, they may be different from mine, but also many of us work shifts that are totally different on one night from the next.

When I first did night shifts, I had no pump, no DAFNE training, almost no carb counting training, no libre (I have one now, and I love it!) and support that went as far as a grand total of “your blood sugars are going to be crap”. No, I’m serious, that’s what the doctor said in clinic as a grand total of advice about starting work (including night shifts). That was it.

My first couple of sets of nights (9years ago) were relatively hellish. And by hellish, I mean working so hard for 14 hours that you forgot you might need the loo EVER and only realised when half way home that you really needed to go because you hadn’t been since you left home the previous evening. But only some of them were like that. On other rotations, I got time to eat “lunch” (or whatever you want to call it. Doesn’t usually feel like a midnight feast) AND go to the toilet! And check my blood sugar. And panic because I didn’t really have a clue what it was doing. I found out pretty fast that the second night of the run would be worst. I could leave home, having bolused “normal” amount for my dinner, with BG of 8. By 2 am I would have BG of 18, and if I corrected I usually crashed horribly to a hypo in the early hours.

I told myself everyone felt as sick as I did – I knew everyone felt sick on nights. Then one night I worked with a diabetes registrar (a doctor on their way towards being a diabetes consultant). A nice, sensible diabetes reg. I had crashed from 17 to 3 in the space of a few hours, and he looked at me and asked if I was ok. I said yeah, my sugar is low but it’s fine – everyone feels sick on a night shift, right? He muttered something about the rest of the world not feeling THAT sick. But there was nothing for him to do. I was doing my job with the illness I had and the tools I had.

When I was an FY2, I did DAFNE. I got a better grip on carb counting. That made some difference. I learnt I could treat a hypo on the post-nights ward round with an endocrine consultant leading the round, without them noticing. I also learnt that nights really made the next week or so pretty awful.

Then I got a pump. One of the reasons I found nights so tough became clear: my morning basal requirements are more than twice my evening requirements. I have an awful dawn phenomenon. Jetlag is a bad plan. Nights are tricky.

I can do nights, now. Theoretically. I mean, I know I can. I know that when I put my diabetes first (and I have to on nights to be well enough to do my work) I can have great sugars. It’s a LOT of work, and the associated fatigue led me to problems with hypos I wasn’t waking up for, and so now I’ve stopped working night shifts. I do know what I need to do (for me) on nights though:

Sleep. No really. My level of fatigue was such that I could sleep in til 11, get up til 1 pm and go back and sleep through until my first night shift starting at 9 pm. Not being sooo tired at the start helps. So, if you can: sleep all day before you start.

So, here are the musings of an Emergency Department Nurse. I’m the ED resuscitation hobbit with a munted pancreas. My thoughts will echo Beth’s to some extent. A little background about me first. I’m an ED nurse and the probable attention span issues to match it. Look, squirrel! I’ve also been type one for twenty years, for six of those I’ve been rocking a bionic pancreas. I work a particularly unpleasant rota involving a lot of nights and I also have a rigorous shift pattern. I have five shifts, early, late, nights, twilights and long days. Over the last eighteen months, I’ve had to develop patterns that reflect the demands of each shift. In addition to that, you have to be very proactive and willing to make changes on the go, this is damn easy using a pump. A small period where I had the loan of a Freestyle Libre as part of a clinical trial made my night shifts much better and easier to get a grip of.

The only minor issue I have with nights is the quantity of junk food and chocolate that nurses and all healthcare professionals seem to exist on. Oh well. Needs must. Just don’t talk to me until I’ve had my coffee.

The last little thing that always seems to get me is that at around two in the morning I suddenly become incredibly sensitive to insulin so I have to be very cautious with my correction doses. This is just the need to get to know your own diabetes and how it behaves on nights. Sadly, we can’t do much else other than trying what fits for size in regards managing diabetes on nights. Getting out of nights and day sleeping is not an issue for me, my flatmate already calls me day walker due to the large number of night shifts that I do which has reduced me to a vampiric wreck. Oh well.

(some low carb, some high, easy to eat, don’t go off fast, don’t need 5mins in microwave that’s not gonna happen, you can eat it when you feel sick)

Do you have any tips or tricks to get through nightshifts? Get in touch over on twitter – @k_d85